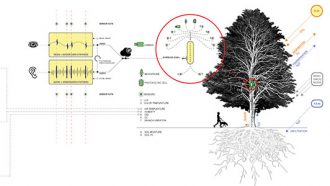 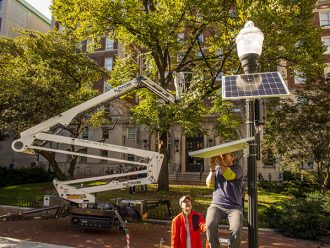 Ongoing. In 2019 a weatherproofed, electrically shielded, solar charged, and networked Treecorder prototype was installed and tested in a large linden (Tilia europaea) that grows in a courtyard at Columbia University. The project received a Magic Seed Grant from Columbia and Stanford Universities’ Brown Institute for Media Innovation.

A tree growing in the sidewalk is an architectural organism. It organizes its urban milieu and, through its body language and habits, gives definition to public space. Continuously adapting—to geophysical stresses, vehicular surges and emissions, sudden cloud bursts, and the unpredictable behaviors of other resident species—its form is never completed.

What are the experiences and coping mechanisms associated with being large, stationary, and long-lived? Video auto-portraits of urban street trees chronicle transactions of these colossal characters with their everyday surroundings and urban cohabitants. The project employs solar-powered cameras, microphones, and sensory instrumentation installed in tree canopies to mediate arboreal and human life—registering their disparate perspectives regarding shared territory, their respective architectures, socialities, mobilities, and temporalities.

The timeframe of a tree is exceedingly slow compared with ours. By coordinating environmental monitoring with observational cinema techniques to capture the cycle of a year or more, the experiment invents a cinéma vérité approach whose revelations emerge through ongoing data capture. The result is a polylinear and polytemporal video/sound installation which reveals motion and use patterns occurring in timescales that otherwise elude human perception. We are also trying to find ways to record what the trees “listen to”, and what they may have to say. The approach learns from research into arboreal communication networks, and builds on my body of work with video and time.

Download text » Embodied Cinema and the Body Language of Trees, 2020. A version of this paper appeared in Adjacent (Issue 7, Spring 2020), an online journal of emerging media published by the Interactive Telecommunications Program of New York University.